Interest rates - how low can you go?

Despite the RBA deciding not to lower interest rates further when they met on December 1, the cash rate and Australia's official interest rate currently stands at a historic low of 0.10%. How much lower can interest rates go?

How long can you go?

Despite the RBA deciding not to lower interest rates further when they met on December 1, the cash rate and Australia's official interest rate currently stands at a historic low of 0.10%.

Whilst great news for mortgage holders and borrowers taking advantage of these low interest rates, it’s not so good for savers and self-funded retirees who rely on the yields from deposits and fixed interest investments to finance their lifestyle.

The longer-term bond markets are seen to be a good indicator of market demand and sentiment. With Australian Commonwealth Government 10-year Bonds yielding just 0.9%* , there appears to be little concern about rates reverting to long-term average any time soon. 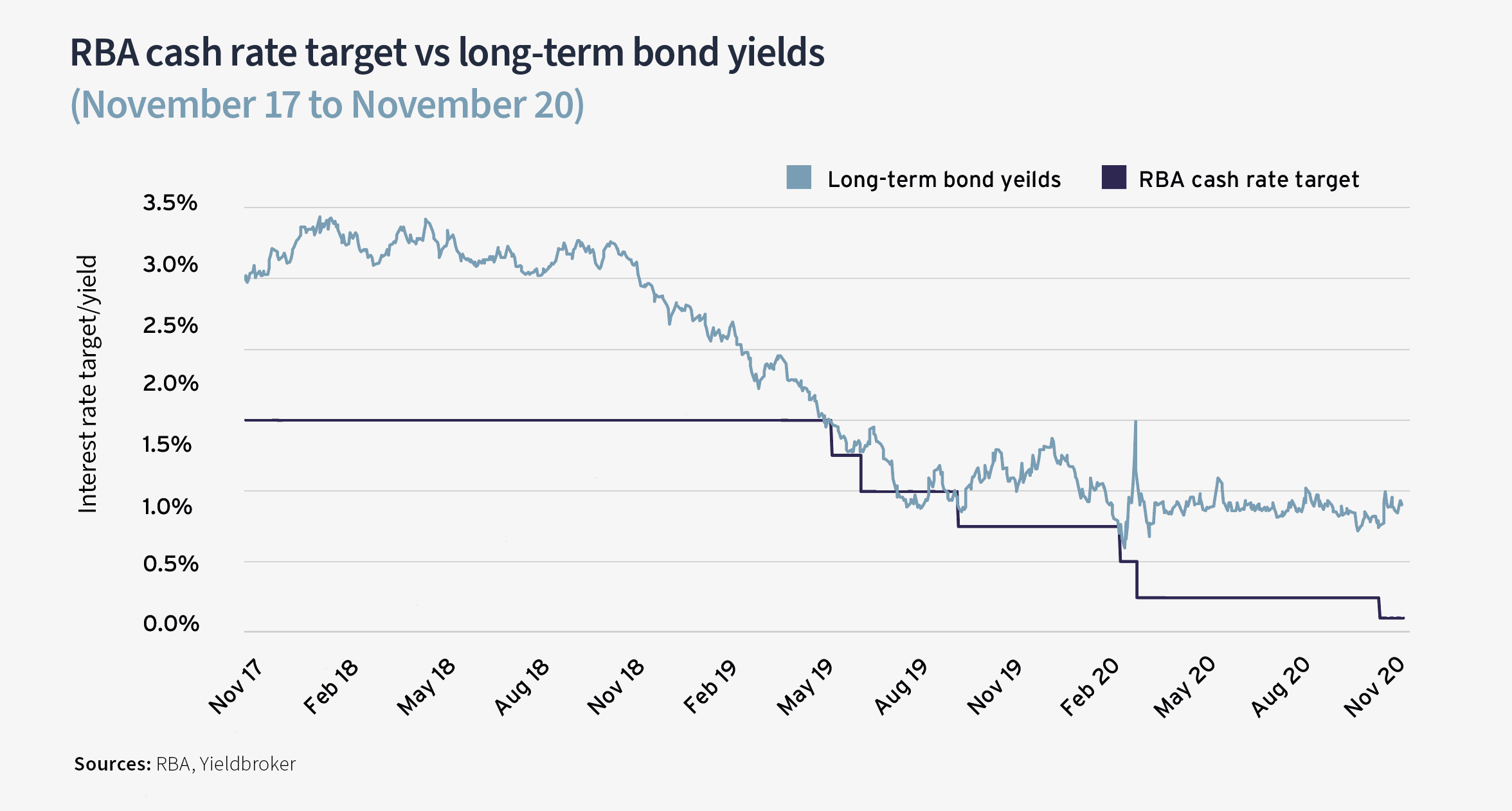 Although the RBA downplays the possibility, its actions over the past six months force Australians to confront the scenario of interest rates going to zero or below – something that has already occurred in countries including Switzerland, Denmark and Japan.

In this article we explore whether negative interest rates (NIR) are possible, and how things work in an economy where borrowers get paid to take out a loan.

The Reserve Bank conducts monetary policy to achieve its goals of price stability, full employment, and the economic prosperity and welfare of the Australian people.  Historically our central bank has targeted an inflation rate (the price of goods and services) of 2-3% as an effective means of stimulating economic growth. In recent times, even pre-Covid, however, it has struggled to keep inflation above 2%.

Australia has many alternatives to manipulating money markets besides continuing to push the cash rate lower – with interest rates being just one of the levers available. With the pandemic placing further downward pressure on inflation, the RBA has begun to call on some of the other methods at their disposal to help support our recovery from the pandemic.

Last month the RBA announced another policy response in the form of a $100 billion quantitative easing program. A popular form of monetary policy in Europe and the US following the 2008 GFC, quantitative easing is a method of increasing the supply of money in the system usually through the central bank purchasing government bonds and other securities.

Interestingly the recent COVID-19 economic stimulus measure JobKeeper was estimated to cost about $70bn, about the same as the ­increase in the RBA’s government bond holdings since December 2019.

Japan was the first major nation to embark on a policy of what once would have been considered extreme monetary easing. Following the crash of the Nikkei shortly after the GFC, the Bank of Japan began a rate-cutting program that took its base rate to zero in 1999 and again in 2014.

Analysis of these countries suggest that their economies are working well under negative rates. The experience in Denmark and Sweden has proven to be an effective monetary policy tool. Negative interest rates – in combination with other policy measures, such as quantitative easing have been effective in meeting the objectives of lifting inflation and inflation expectations in Sweden and in stabilising the exchange rate in Denmark.

How do negative interest rates work?

It might sound crazy, but if the lending rate is negative and you borrow an amount on interest-only terms, the bank in theory pays you interest. The flipside of this is that you pay the bank for safekeeping of your cash deposits.

Aside from lowering borrowing costs, supporters of negative interest rates say they help to weaken a country’s currency, giving the export market a competitive advantage and boosts inflation by pushing up import costs.

But negative rates also mean financial institutions are earning less on loans. There’s a limit to how far into negative territory the central banks can push interest rates before savers start to stash cash under the mattress to avoid negative charges on their deposits.

Given the global trend towards zero and negative rates, the possibility of this occurring in Australia is something that needs to be considered. That being said the RBA has stated that they see little to be gained from lowering the policy rate into negative territory. While they acknowledge some of the potential upside, they are more concerned with how it may impair the supply of credit to the economy and lead some people to save more rather than spend.

Although negative rates feature in many overseas economies and markets e.g. gold and physical currency, they present unique challenges for the economy and financial system which need to be planned for. So we're left with a game of limbo — how low will the Reserve Bank go in lowering its cash rate target?

As always if you have any questions speak with your Shadforth Private Wealth Adviser.