The Research Team provides a performance summary and commentary on each of the five main asset classes.

The Australian market rose by 1.8% in the September quarter. The leading sectors were Energy (up 9.3%) and Industrials (up 6.6%). Materials (down 9.9%) was the worst and only negative performer. We saw a unique event with all sectors except for Materials outperforming the Australian market (this is the first time this has happened in the 20-odd years we have sector-level data).

Returns were defined by a gradual rise over both July and August with September seeing a sharp selloff in the Materials sector, triggered by a decline in iron ore prices and weaker sentiment on Chinese growth with companies such as BHP Billiton, Rio Tinto and Fortescue all struggling as a result. Concerns over energy shortages in China and Europe amidst rising LNG prices saw a sharp Energy sector rally (up 16.7% in September) to end the quarter as the best performer with companies such as Woodside Petroleum up 7.5% over the quarter (22.5% in the month of September).

Smaller companies were the clear winners with the Small Ordinaries benchmark up almost 3.4% versus a 1.7% rise for the broader share market.

The sector was led higher by retail companies such as Scentre Group (Westfield’s landlord) and Vicinity Centres as well as developer Mirvac Group. Continued concerns over growing COVID-19 cases and accompanying lockdowns weighed on these companies initially. However, the surge in vaccination rates, led by NSW and Victoria, helped restore investor sentiment over the course of the quarter in anticipation of a bounce back for consumer spending.

Unhedged international shares had a stronger quarter, compared to the Australian market, rising 3.9%.

International markets were broadly positive for the September quarter. Emerging market shares were a notable exception (down 4.5%). A regulatory crackdown in China continued to weigh on the index with some more recent examples including the denunciation of video games as a ‘spiritual opium’ and restrictions on player game time punishing large cap tech companies. Another concern was the variable interest entity (VIE) structure which Chinese large caps have relied on to raise capital from Western markets. The crackdown on the online tutorial sector also involved banning this as an option, raising concerns for other companies that employed it.

Slowing global growth cooled optimism on the ‘reflation trade’ which benefitted cyclical stocks and the value style during the September quarter. In September, China and energy concerns were a heavier focus triggering a slight correction following positive performance in July and August. Energy concerns relate to production issues for coal and natural gas with lower supply helping to drive prices higher. Another factor was market distortion given Chinese bans on Australian thermal coal while weaker renewable production in Europe from North Sea wind generation was another driver.

A substantial driver was increased uncertainty and negative growth news. For example, the extended lockdowns in NSW and Victoria saw expectations for economic growth weaken, pushing back the need for rate hikes and making bonds more attractive as a result.

Concerns over Chinese growth, particularly in its property sector, raised fears for Australian resource demand, particularly iron ore which saw its price decline 44.2% over the quarter.

During the quarter the Reserve Bank of Australia (RBA) deferred its review of the bond purchasing program (initiated last year) until February 2022. It also lowered the pace of weekly purchases to $4 billion per week, down from $5 billion per week. This was net positive for bonds as it keeps a large, price-insensitive buyer of bonds in place (the RBA), keeping demand strong and pushing prices higher.

The Cash benchmark, the Bloomberg AusBond Bank Bill Index, was flat during the September quarter.

The RBA repeated remarks that it does not anticipate moving rates higher until 2024 at the earliest. This is due to the time it will take for the economy to recover and inflation to return to target levels of 2-3%. Market expectations also shifted lower, pushing out an expected rate hike (back to 0.25%) until early 2023. Key drivers included the escalations of lockdowns along the east coast states of Australia which substantially reduced economic activity as only essential businesses could remain open. 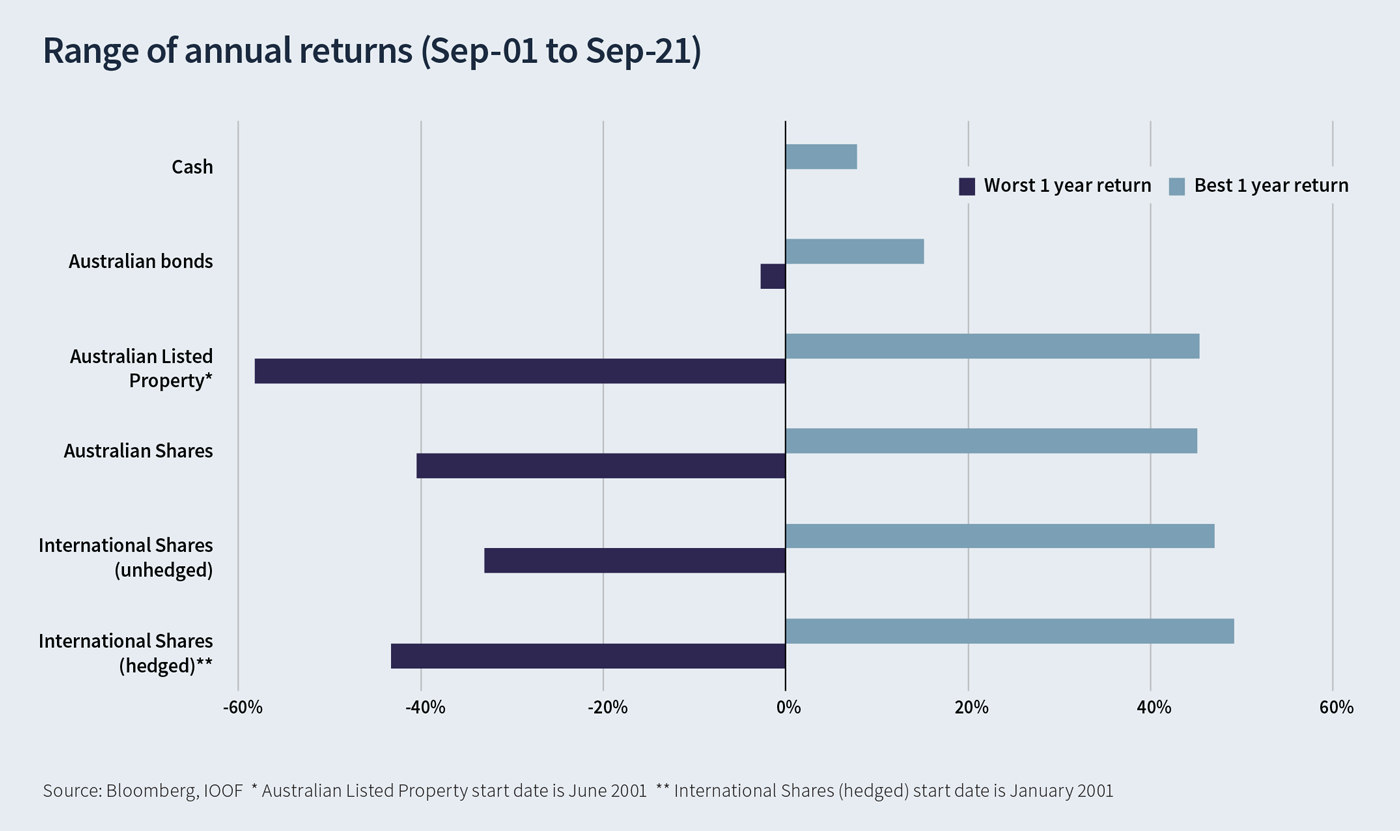