The Research team provides a performance summary and commentary on each of the five main asset classes.

Most sectors performed positively, except for the banking, property and consumer staples sectors.

The banking sector, as a major component of the overall market, struggled as both Westpac and NAB faced regulatory scrutiny. Westpac was in the process of raising capital (which would normally negatively affect the share price) when regulator Austrac launched civil proceedings against the bank, alleging numerous breaches of anti-money laundering and counter-terrorism legislation. Westpac may be facing a fine in the hundreds of millions while CBA settled a previous case with Austrac for $700 million. This development saw the Westpac share price fall substantially.

Energy stocks did well on the back of a new deal by nations in the Organisation of the Petroleum Exporting Countries (OPEC) such as Iraq, Kuwait, Libya and Saudi Arabia, to cut back global oil production. The prospect of reduced supply helps drive oil prices higher.

This was predominantly interest-rate driven. A-REITs are often held for their income generation as an alternative to bonds. As such they are sensitive to changes in bond prices. As bonds become cheaper and offer more attractive yields to investors, REITs will tend to follow suit with negative capital returns as a result.

Company news was focused on annual general meeting (AGM) updates and guidance for the 2020 financial year. Property fund manager, Cromwell Property Group was the target of activist shareholder ARA Asset Management over excessive management compensation and paying unsustainable dividends. ARA also unsuccessfully tried to appoint lawyer Gary Weiss as a Director and as its representative on the Board at the Cromwell Annual General Meeting. This activism, in addition to rising bond yields, weighed on the Cromwell’s share price.

Global markets had a strong quarter with the MSCI World Index in Australian dollar terms recording a gain of 4.2% for the December quarter.

Most global share markets rose during the quarter (in local currency terms) led by positive performance in US technology shares with Chinese shares close behind. Expectations of a resolution to the trade war between the US and China contributed to improved investor risk appetite, as did easing by central banks during the quarter. In addition, positive economic reports, such as the JP Morgan Global Composite Purchasing Managers Index (PMI), signalled improvement in global growth.

The Australian dollar rose during the quarter which slowed unhedged global share returns. Key drivers for this was progress on trade talks between the US and China as well as stronger underlying Chinese growth as signalled by the Chinese Manufacturing PMI.

Australian and global bond yields fell further during the quarter with the Bloomberg AusBond Composite index declining by -1.3% during the December quarter, which was driven by higher bond yields.

In Australia, there has been a continuation of weak data for the domestic economy, including weaker economic growth and poor consumer and business confidence, as measured by Westpac and NAB surveys respectively. While inflation rose slightly by 0.6% during the June quarter (reported in July) on an annual basis it was only 1.6%. This remains below the Reserve Bank of Australia (RBA) target range of 2–3%.

In addition, the unemployment rate at 5.2% (as of September) remains above the RBA target of 4.5%. Taken together, these factors contributed to the RBA’s rate cut decisions in June, July and, following quarter-end, in October.

Concerns over rising trade tensions between the US and China, as well as weaker global growth fears, contributed to falling yields globally which also affects Australian bond yields.

The RBA cut interest rates early in the quarter by 0.25% and subsequently left the cash rate on hold at 0.75%.

The RBA outlook continues to be driven by concerns over slowing economic growth and their view that rate cuts can continue supporting lower unemployment without increasing inflation. The ultimate impact will be mixed. Borrowers benefit from greater spending power while investors and savers will see lower future returns as a result. 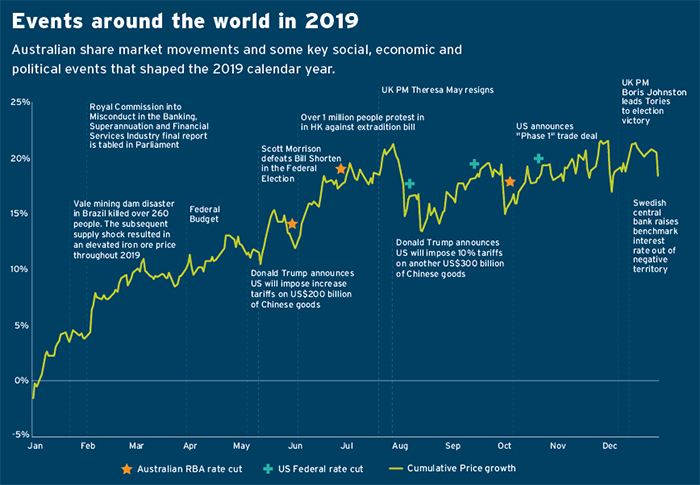